“Friends are the angels that lift us up when our wings have forgotten to fly.”

Who loved her young son more than heaven and earth …

Who was a fiercely intelligent, driven, passionate advocate for others until the very end…

Who touched the lives of everyone she met, who was intellectually curious about everything around her, who was always the one who brought strength and laughter no matter how difficult the situation, and who brought so much joy to her family and her so many friends?

Donna Chaffe, my friend, sister, and fellow breast cancer advocate, passed away this Monday, October 13th at the young age of 48.  And the day she died was this year’s “Metastatic Breast Cancer Awareness Day,” the one day in the pink haze of October that is dedicated to debunking the “feel-good” myths and increasing understanding of the very dark realities for those with breast cancer.

As Dr. Susan Love explained in her October 13, 2011 blog piece, Metastatic Breast Cancer: Telling the Whole Story, “I can’t tell you how important it is that there is at least one day in October that is dedicated to acknowledging that not everyone is cured and not every cancer is found early. We need to stop congratulating ourselves on our progress and start focusing on figuring out why these women have not benefited from all the money we have raised. Reach out today to someone you know [who] represents the other side of breast cancer, the one that is not so pink. We will not have accomplished this goal as long as one woman dies of this disease!”

Donna, who knew the other side of breast cancer far too well, was a passionate advocate focused on the need for meaningful, innovative, and impactful research for the prevention and cure of metastatic breast cancer.  And the day that Donna and I met for the first time, we were both new advocates who were attending the National Breast Cancer Coalition (NBCC)’s Project LEAD®, which is a premier advanced, and intense scientific training course on breast cancer.  We were both excited about becoming active educated breast cancer research advocates in order to gain a seat at the table with senior advocates, scientists, clinicians, and other stakeholders where research decisions are being made.

I’ve written about this before, but it bears repeating.  When I first walked into that room in Denver as Project LEAD was beginning, I was a painfully shy, relatively young woman who had never traveled on her own before, who was enervated by any new social situation, who was extremely uncomfortable being in a room full of strangers.  But just a few days later, at the end of Project LEAD, I left that same room having made lifetime friendships with several of the women who were my fellow LEAD Graduates—and I’m blessed that Donna was one of my new sisters.

Most who knew Donna would probably agree that she was anything but shy.  She was full of energy, so friendly, outgoing, passionate–and absolutely hilarious.  She had a million-dollar smile that lit up a room, and I have no doubt that I laughed more with Donna during those few days in Denver than I had in the entire year before.

After Project LEAD, Donna was interested in becoming a peer reviewer for the Department of Defense (DoD)’s Breast Cancer Research Program—and she would have done so if her need for more treatment had not prevented that.  Breast cancer is a cruel enemy, and each time Donna was right on the cusp of becoming a reviewer for the next peer review cycle, it seemed that it resisted, taking a new turn that required additional treatment and caused difficult side effects.  But Donna never seemed to become discouraged and continued advocating in so many ways.  One of the many things I’ll never forget about Donna is how she immediately jumped in to advocate for my first cousin, Laura, when she was diagnosed with metastatic breast cancer.  As I wrote in an earlier blog post, the upsetting irony was that I received the news about my cousin while sitting in a session on the advances in breast cancer treatment in the last 50 years.  Surrounded by hundreds of others during this session of the American Society of Clinical Oncology (ASCO)’s Annual Meeting, as tears were rolling down my face, I immediately sent messages to dear friends and advocates with metastatic breast cancer themselves, asking if they could provide my cousin with support.  This of course included Donna.  In my note to her, I told her that I had a huge favor to ask:  I explained that my cousin was “blind-sided and isn’t yet able to talk on the phone, but when I asked if she would be interested in corresponding with some wonderful advocates and dear friends of mine who are living with metastatic HER2+ breast cancer, she immediately said yes.  I know that it’s been a very tough time recently, so if you’re just not up for this, I completely 100% understand.  But if you are able to, I would forever be grateful because I can’t imagine anything that could be more helpful to my wonderful cousin than corresponding with you, my dear friend and wonderful advocate.  With love and gratitude, Deb.”

And of course, Donna immediately responded:

“I am so sorry, Deb.  Cancer really SUCKS!!!  I will absolutely!!! contact her.  This round with me is so far my scariest.  I know the feeling of being told ‘it’s back’ and I wish no one ever had to hear it.  Luv ya, Deb, hang in there sweetie.”

This took place just months ago in late May.  Even as she was having such a difficult, frightening time herself, she continued to advocate passionately for others—truly amazing, so truly Donna.  Just one look at her Facebook page shows her enduring spirit and strength, such as the quotes that she loved to post–which always inspired all of us who read them.  For example, this August, she posted the following: 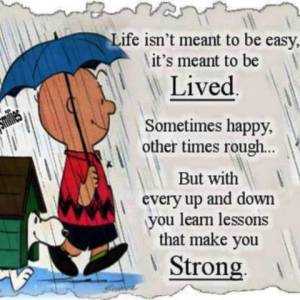 And in mid-September, she shared this:

In late September, though she was feeling very tired and having difficulty with her new medications, she shared with her friends that she had “finally taught ‘The Boy’ to make chili!” and that she was recording recipes “for Erik for someday, including old family secrets. ;)”

And on October 3rd, Donna typed her last posting on Facebook, as always advocating for others:

“Please remember that we are entering PinkTober.  However, nothing ‘pink’ cures cancer, especially pink lightbulbs.  Ensure that if you buy something pink for ‘awareness’ that the proceeds are going to research into or prevention of metastatic cancer!  Breast cancer has to spread to kill.  We’re all becoming ‘aware.’ Now let’s put that awareness to use through research into causes and prevention.  Make chemical companies stand up and tell us why they are still adding carcinogens to our food and environment!  METAvivors unite! Some of us are still waiting for a miracle!!!”

Ever hopeful, ever strong–The fact that such a miracle did not come in time for Donna breaks my heart. 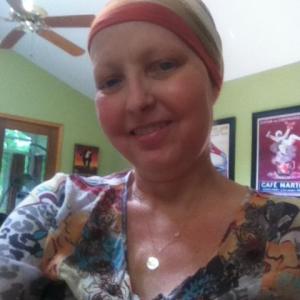 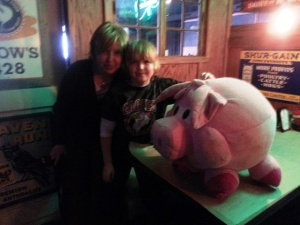 Donna with her beloved son, Erik, at the “One-Eyed Pig BBQ” during a visit with us in Newtown, Connecticut in March 2013

In Donna’s obituary, the family asks that in lieu of flowers, memorials may be directed to the Iowa Breast Cancer Action Foundation in Donna’s memory.

3 thoughts on “In Dedication to Donna”