I’m not sorry to say good-bye to 2015.  It was a cruel year during which we lost several beloved patient advocates, who were wrenched away from their families, their friends, and so many loved ones by the monstrous, hydra-headed beast, cancer.   It was the year during which I learned that my first cousin had been diagnosed with brain metastases due to her stage IV HER2+ breast cancer. It was the year when I began to fear going onto Facebook, since I’ve now learned heartbreaking news about dear friends there far too many times. And it was the year when I began to dread receiving any emails whose subject lines simply contained the name of a fellow advocate with cancer—because it almost always meant the same thing, more tragic news, the loss of yet another dear friend and remarkable advocate.

In years not so long ago, when I was asked to explain what it meant to be a cancer research advocate, I welcomed the question. After all, I was being asked about my passion, what in many ways had become my raison d’etre. I could pinpoint with precision the very week when I stepped out of my role as a cancer patient and into that of a research advocate. After much difficult, fascinating, intellectually inspiring work, I was now sitting at the table as a partner with researchers, clinicians, and fellow advocates to drive the critical research questions that truly mattered to cancer patients themselves. I was an engaged, vocal participant at national cancer conferences, sometimes watching history being made as new treatment breakthroughs were being presented—and sharing deep disappointment with the oncologists, scientists, and advocates in the audience when novel agents that were followed with excitement ultimately failed to live up to their promise. And I was meeting highly passionate, intelligent, driven people from all parts of the country and, often, other nations, who were fellow cancer survivors and committed advocates, forming immediate deep friendships. It’s very difficult to describe how meaningful such friendships are. They involve an instant recognition of a kindred soul–one who knows first-hand just what you’ve been through from all aspects, including physically, emotionally, mentally, socially, spiritually, when cancer so rudely knocks at your door. These are folks who truly “get it,” to whom you immediately and without hesitation find yourself opening your heart and confiding the most private thoughts and concerns in a way you never could, nor wished to do so with your loved ones, in your reflex to protect them from your darkest thoughts and fears. Such friendships are life-changing, they are life-long, and they are one of the indescribable gifts that can give even the most difficult lives meaning. And yet. When your lifelong friend’s life ends far too soon—and due to the very reason that brought your life paths together when they otherwise never would have crossed—what then?

It’s now been more than 8 years since I’ve stepped into the role of an advocate. And with each year comes an increasing wave of devastating news. The terrible truth is that this should not have been unexpected for we who are cancer survivors and research advocates. For those of us affected by breast cancer, for example, we know that HER2+ and triple negative/basal-like breast cancer subtypes are associated with early relapse risk. And we know that ER+ tumors are associated with persistent late relapse risk beyond 5 years, with up to one-third of patients recurring potentially decades after active treatment. Yet every single time I learn that one of my advocate sisters or brothers has developed metastatic disease, I’m blindsided. And worse, when I receive the terrible news that a friend with stage IV cancer has passed, I still somehow allow myself to be blindsided yet again. After all, for my friends with metastatic breast cancer, I knew that they did not have curable disease. Each time, we prayed that their treatments would lead to “no evidence of disease” (NED) and that this would last indefinitely–or until additional, much more effective treatments became available. And for some friends with stage IV disease, they have remained with NED for several years. Others have sought new clinical trials after their cancer became resistant to their current treatment and were able to maintain stable disease for quite some time, sometimes for years—and if they became resistant to that agent, some were able to enroll on another clinical trial. And yet. There have been more of those times when, after seeing my friends year after year at the same conferences or grant review sessions, they suddenly were not there. Or they were, yet it was impossible to deny how frail they appeared, how very sick they were, that their cancer had become more adept at resisting treatment. And perhaps the most soul-shattering times were those when, after speaking with a friend who seemed to be doing extraordinarily well with her new treatment, we learned very shortly thereafter that she was no longer with us. Each and every time, I’ve been blindsided by their deaths; I’ve been lost, angry, completely unaccepting of their loss from this world.

When undergoing my active cancer treatment for Hodgkin’s and, later, for breast cancer, I often worried about my oncologists and the oncology nurses who spent so much time with us, who supported us at the scariest times of our lives, who provided comfort and strength not just to we as patients but to our families as well. Both of my oncologists and their oncology nurses essentially became honorary family members, as they did for so many others whom they treated day in and day out, year after year. How were they able to form such powerful, caring relationships, yet learn how to cope with their patients’ deaths, the deaths of far far too many patients? Fortunately, in more recent years, there has been increasing discussion and recognition about the impact of such repeated losses and the need for improved resources and support for oncology professionals. As noted in Cancer Therapy Advisor, “Everyone who enters the field of oncology knows that many of their patients will die, but foreknowledge is not protection against the cumulative effects of loss.” I would argue that the same is true for cancer research patient advocates, particularly for those of us who have been actively engaged for several years and are experiencing what has been described as “cumulative grief”–the compounding emotional, physical, and spiritual responses to repeated exposures to profound loss. Just weeks ago, upon learning of another friend’s death, I shared with a fellow breast cancer survivor that I was still reeling from the terrible news (and the awful news before that, and the devastating news before that)—and her response was direct, simple, and wise: “Deb, this is the hard part.”

That it is—and during this past year, the sheer weight of it was sometimes more than I thought I could bear. Yet it’s during those times that I try to remind myself: in addition to being advocates for cancer research, we’re here to advocate for one another, and the support we provide to our fellow advocates during these devastating times is crucial. Oncologists and oncology nurses have appropriately stressed the need for greater institutional and professional support to help them cope with their grief due to their patients’ deaths. It could be extraordinarily helpful if we, too, as dedicated cancer patient advocates, similarly received such supportive and educational resources through cancer organizations and professional societies on topics such as cumulative grief, end-of-life care, pain management, and palliative care. After all, as we know so well, knowledge is power and often provides the tools and the strength to transform even the most difficult, painful problems and emotions, including grief, into truly positive outcomes.

In addition, every time we experience these terrible losses, it serves as a stark, powerful reminder of why we became advocates in the first place. As cancer patients and advocates, we are the ones who bring a critical sense of urgency to identifying the cancer research questions that truly matter, that will have the most impact, that will ultimately lead to more cures. By working to support one another and to transform our grief into remembrance and renewed commitment to our advocacy efforts, perhaps that is the most appropriate, necessary, and powerful way to honor all of those we have lost. 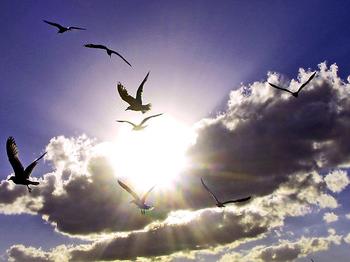 It pains me to say that just 5 days after the new year, our cancer patient advocacy community has experienced yet another devastating loss.

Ellen Stovall was the Senior Health Policy Advisor at the National Coalition for Cancer Survivorship (NCCS) and a founding member of the Institute of Medicine (IOM)’s National Cancer Policy Board.  As I posted on Ellen’s wall on Facebook, she was a shining light to so many of us, and it is impossible to articulate the profound difference she has made for cancer survivors in this country. She spoke profoundly and powerfully on the need for further knowledge about the very serious late effects that can result from cancer treatment. Though I never had the honor of meeting Ellen face to face, I was and will always be inspired by her remarkable accomplishments in cancer survivorship advocacy.  As I’ve written about here in my blog, like Ellen, I was originally diagnosed with Hodgkin’s lymphoma, and I also went on to develop potentially life-threatening late effects of my treatment, including breast cancer and cardiac disease. It is absolutely devastating that Ellen passed away 2 days ago due to sudden cardiac complications secondary to her cancer treatments. Her passion and commitment touched so many lives, and her legacy will continue–a legacy of ensuring that cancer survivors are able to become true partners in their medical care and that shared decision-making with their medical team will help to prevent or mitigate such life-threatening late effects for many cancer patients. My first major focus as an advocate was the need for improved cancer treatments that minimized the development of serious acute and late effects while continuing to ensure optimal efficacy and positive patient outcomes. Going forward, my efforts in this critical area will be in tribute to Ellen, one of the true pioneers of the art and science of cancer survivorship. 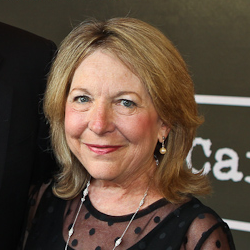 “So, my closing thoughts to you are, as you leave this room today to go back to the very, very important work of writing grants, reviewing grants, and helping people in your communities day to day deal with their personal journeys of survivorship, please know that the cancer advocacy community, represented by scores of organizations that were founded by and for cancer survivors, stands ready and eager to tell you our stories of survivorship with the belief that while grateful for the blessings of survivorship, for the increasing length of days, months, and years added because of new and improved therapies for cancer, that this diagnosis is filled with many punishing and adverse consequences as well as joy for living each day.

“The physician Victor Sidel once said that statistics are people with their tears wiped away. That is the way NCCS views cancer survivors, and on behalf of all of us at NCCS, thank you for your attention and for all you do for cancer survivorship.”

Thank you, Ellen, for all you have done for so many.  Rest in peace.